In a 19th century commercial report the Arab merchant Suleiman told of his travels in China. He mentioned tea as an almost sacred herb, the importance of which was essential in Chinese society; outside Chinese texts, this is the oldest written record about the existence of tea. Tea arrived in Egypt towards the 16th century, having passed through Pakistan, the Arabian Peninsula and Turkey. But its progress stopped there and it did not get past the Libyan Desert. 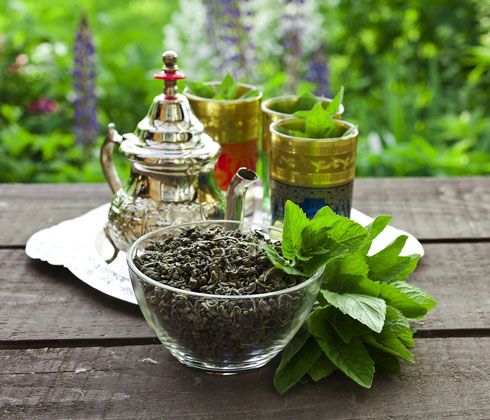 In fact, it was not until the middle of the 19th century that tea is introduced to the countries of the Maghreb, at a time when the English, faced with the loss of the Slavonic market after the Crimean war, were looking for new openings. They turned to sell their supply towards Morocco, and more specifically towards the ports of Mogador and Tangier. The most popular beverage at the time in Maghreb was an infusion of mint leaves, sometimes of absinthe. Tea was favourably received by the people since, by mixing it with these leaves, it made them less bitter without spoiling their flavour or their colour. It was rapidly adopted and the traditional Moroccan way of drinking tea was born. Thanks to nomadic people tea drinking soon spread all over the Maghreb and the whole of West Africa.

Ever since, serving mint tea has become part of the rulebook for good living, not only in Morocco but also in many other Arab countries. The tea used is always green tea, usually Gunpowder, which is known for its freshness and thirst quenching qualities.

Tea represents the most refined expression of hospitality. It is usually the head of the household who prepares it, sometimes his eldest son, unless he wishes to honour his guest by inviting him to carry out the task. Two teapots are prepared at the same time: the person officiating puts a large pinch of green tea in each one, which he then quickly rinses with boiling water to take away its bitterness. A handful of mint leaves and a large piece of sugar loaf are then added to each teapot, and covered with boiling water.

After a few minutes of infusion, the person making the tea stirs the mixture and tastes it, adding a few more leaves or a little more sugar if needed. Next, he lifts both teapots up high and then pours the tea into the small glasses, which he will carry on a finely engraved metal tray. Three successive infusions are served, each one sweeter than the last, and after the final one it is polite for the guest to signal that he will leave.

In the desert the preparation of tea is slightly different and is accomplished using small enamelled metal teapots, which are placed directly on the fire and filled with tea, water and sugar. As in Morocco, three successive teas are served: Touaregs say that the first is strong, like life; the second is good, like love and the last is sweet, like death.