The introduction of tea to Africa goes back to the end of the 19th century. It first originated in South Africa where the English started its cultivation to secure new sources of supply. Then, German settlers experimented with its cultivation on the slopes of Mount Cameroon and in Tanzania.

Discover all our teas from Africa 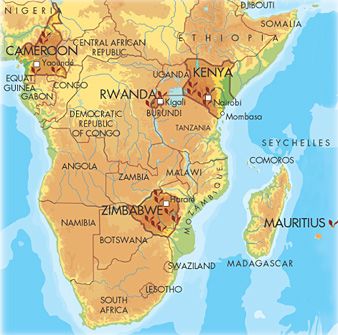 Throughout the 20th century numerous countries began to grow tea, and today, the African continent is an important player in the world tea market. Kenya is ranked third in the tea world production.

The teas are produced either by using traditional methods, giving either broken or whole leaf teas, or equally they are produced by CTC, "crushing, tearing, curling", a mechanical process that transforms the tea leaf into tiny pearls mainly for teabags. Today a dozen African countries produce black tea, of an uneven quality depending on its origin, and Palais des Thés experts have decided to only buy the product from some of them.

Kenya is the fourth largest producer in the world today, contributing to 8% of the total production. Almost all the teas from the country are CTC teas with the exception of the Marynin garden which has kept its traditional processing methods.

Native to South Africa, the Aspalathus linearis, or Rooibos bush as it is commonly known, is a different plant from the tea plant, which gives a pleasant beverage with no caffeine and almost no tannin.

Mauritius, which is close to Reunion, produces teas. The most famous of which is appreciated for its vanilla taste.