Sri Lanka, nicknamed the tea island, is the third largest producer in the world and supplies more than half of the black tea consumed in France.

Discover all our teas from Sri Lanka

In 1972 the island of Ceylon changed its name to Sri Lanka, but its former name, which dates back to the British Empire, has remained in use within the world of tea. It is not unusual to speak of a "Ceylon" to describe a tea from this country. 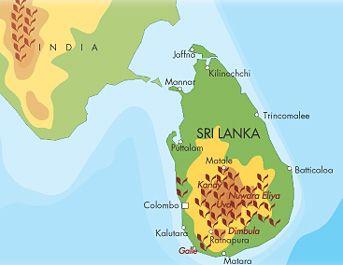 The English introduced the tea plant in 1857 but it was not really developed until after 1870: in essence tea cultivation in Sri Lanka owes its development to the total destruction, in 1869, by a parasite of the coffee plantations which used to cover the entire island. Today, tea culture is so important that it is currently known as "the tea island".

Sri Lankan teas come from six regions located in the south of the island at altitudes ranging from sea level up to 2,200m. Plucking seasons vary from region to region, depending on when the monsoon is expected that year : low-grown below 600m, mid-grown between 600m and 1200m and high-grown, above 1200m.

A Sri Lankan tea can be recognized by its superb copper colour and its lively, piquant scent. As for the taste, this varies from one region to another, with the higher altitude teas very often being the best.

As in India, tea growing is organized into gardens, with the name being specified whenever a tea comes exclusively from one of them and has not been blended with any other teas.

A high altitude region that is hardly touched by the monsoon. Plucking takes place between February and April for the best quality. Teas from this region can be recognised by a bronze colour the leaves take on when they are infused. The liqueur is very clear and amber-coloured and its taste is flowery and evokes jasmine.

A region of intermediate altitude, notable for its season of dry winds (June to September), which give the Uva region teas their main characteristics: a copper-coloured infusion, mellow and aromatic teas with a round taste, but less full-bodied than other Sri Lankan teas.

The district around Dimbula is drenched by the monsoon rains from June to September. Plucking takes place from January to mid March. The teas are full-bodied and astringent. They produce a light brown infusion and a dark liqueur.

This low-lying district produces good quality teas that are full-bodied and astringent.

This district, located in the south of the island, is renowned for its Orange Pekoes with their highly worked and very regular leaves. Their aroma is powerful and long lasting in the mouth.