The island is extremely fertile and possesses ideal growing conditions: high altitude plantations with a constant temperature of 12°C- 20°C and good humidity.

Discover all our teas from Taiwan

When we talk about tea, Taiwan reverts to Formosa, “the beautiful island”, the name given to the island by the Portuguese upon discovering it. Located under the Tropic of Cancer, conditions on the island are ideal for growing tea plants, as both humidity levels and the average altitude are relatively high – Taiwan is home to the highest plantation in the world, situated at 2,450 metres above sea level. Tea arrived on the island in 1796, when the Chinese began to settle there and acclimatise the seedlings they had brought from Fujian, but it wasn’t until 1860 that production really began to take off and the produce was exported.
At the end of the 1970s, however, the government changed the emphasis of the tea industry, to such an extent that today, 85% of production is consumed domestically and Taiwanese tea now consists not only of standard-quality black and green teas but has also become synonymous with excellent Oolong teas. There are also delicious black teas that can rival even the very best Grands Crus from continental China. 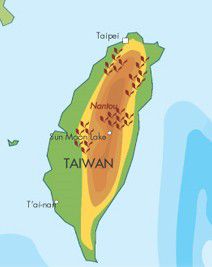 These teas can undergo various levels of fermentation depending on the plantation, something that makes it rather pointless to compare Chinese with Taiwanese methods.

It is the Taiwanese that have long prevailed in the classification of Wu Long (Oolong) teas. Taiwanese teas are therefore classified according to their degree of fermentation and not to their method of production.

Discover our Oolong teas from Taiwan

Taiwan makes both green and black, of which the famous Tarry Souchong smoked teas are renowned for their unusual strength.