Tea appeared in Japan under the influence of the Chinese Tang dynasty, during the 7th century, but its widespread adoption by Japanese society was very slow. For a long time, tea was a privilege reserved for the priests, being drunk only by Buddhist monks.

Discover all our teas from Japan

It was not until the 9th century that the first tea plants were grown, and not until 1202 that they were planted in the province of Uji, which is now famed for producing the best green teas in Japan. Later the great Zen priest, Sen-no Rikyu (1522-1591) classified the link between tea, Buddhism and the different schools of tea, creating in this way to the most complete form of Cha No Yu. 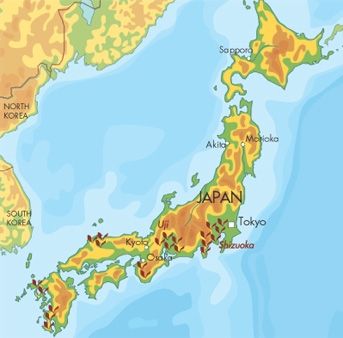 To the exception of the Matcha tea ceremony, Japan produces today many whole leaf green teas of very high quality whose preparation demands some special cares. The delicacy of the leaf requires a quick infusion and a water temperature which is lower the higher the quality of tea.

Unlike all the other green teas produced in the world, Japanese green teas are not prepared according to the traditional Chinese process but undergo a special type of firing, by using steam. The leaves, instead of being roasted in a boiling hot receptacle, are steamed for a few minutes, which gives them a shiny appearance and a slightly iodised taste which is immediately recognizable.

Because of this typical appearance and flavour, Japanese green teas often provoke surprise in Westerners. They must be drunk unadulterated, with nothing added.

Gyokuro teas are the most prestigious green teas of Japan and are some of the most expensive teas in the world. They are only plucked once a year, and only in selected plantations. A few weeks before the harvest, the planter takes care to cover the tea plants with sheets or with bamboo straw matting, to filter 90% of the sun's rays. Starved of light, the tealeaf softens and starts producing much more chlorophyll than it would have done in the open air, which gives the tea a flavour of incomparable freshness and purity.

Sencha teas are green teas very widespread in Japan. Their name in Japanese means "infused tea". They are produced several times a year using the best leaves from the tea plants.

The plucking is done mechanically, a technique that the Japanese have mastered so they can obtain teas of different grades. After steam firing, the leaves are folded to look like small flat needles. A Sencha tea is prepared with varying quantities of tea, differing volumes and temperatures of water, as well as different times of infusion, depending on its quality.

Tamaryokucha teas are produced in the same way as Sencha teas. They are simply rolled instead of being folded, which gives them more colour.

Bancha teas are produced with lower, larger leaves than those used for Sencha teas. The folding of the leaves is also less refined. They make up the bulk of Japanese production and are taken in three different guises: natural, grilled (Hojicha teas) or with cereal grains added (Genmaicha teas).